Cupping therapy was first discussed in old medical textbooks in the Western World and was described as a medical practice that was used by Egyptians. There have also been accounts of Hippocrates using the Cupping Method for internal disease. Cupping therapy is an alternative form of medicine and is perhaps better known as a traditional Chinese Medicine, like acupuncture.

The cupping method was said to pull toxins from the body. The application of cupping throughout the years has evolved from the use of animal horns to bamboo cups, and then to the glass cups, we see used today. Therapy cups can also be made from earthenware and silicone materials that can withstand being exposed to elevated temperatures during the heating process.

Cupping therapy, also known as hijama therapy in some Arabic cultures, is a fascinating alternative form of medicine that has received mention in historical accounts dating from possibly 5,000 years ago.

The basic idea behind cupping therapy is to place glass cups or silicone cups on the patient’s skin to create a vacuum, so the blood is drawn to the surface of the skin in specific parts of the body that need healing.

During a dry cupping session, the glass cup or vessel is set on fire using a flammable substance such as alcohol or herbs. The fire begins to go out, and the alternative medicine practitioner places the glass therapy cup on the surface of the patient’s skin. As the therapy cup cools, it creates a vacuum or suction. The skin will rise into the glass cup and will begin to redden. Typically, these glass or silicone cups are set in place for up to three minutes at a time. But some treatments require longer times and can last up to twenty minutes. Dry cupping produces a low amount of pressure. The cups are better suited for use on the softer tissue so that a secure and tight seal is allowed against the skin. The skin may also be lubricated so that the cups can be moved around from one area to a larger area. 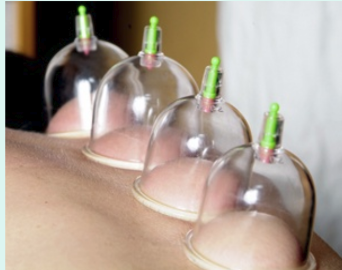