Men hair loss also known male pattern baldness is the most common type of hair loss and is also termed as Androgenetic Alopecia. In today’s world more the 90% of men suffer from male pattern baldness by the time they reach their 50s and from which more than twenty five percent  start suffering  through this painful process before even reaching the age of twenty-one.

Due to this one may suffer from embarrassment and emotional pain causing lack of self-confidence. Male pattern baldness is generally caused by due to male sex hormones (androgens).These hormones accumulate around hair follicles damaging the hair shaft. Androgens are passed on from one generation to another.
The falling of hair depends greatly on genetics. Due to this reason some men go bald and some don’t. So it all depends upon the genetics that some men may go bald and at the same time in other thinning of hair may occur due to male pattern baldness. This condition may not be as noticeable in women because women produce less amount of testosterone as compared to men which is the main cause of DHT (Dihydrotestosterone). 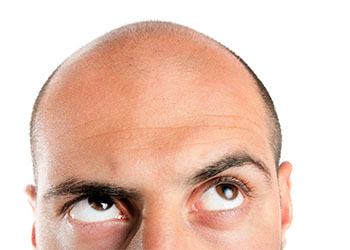 Symptoms or Signs of Hair Loss

Nowadays almost everyone is troubled with hair fall or hair loss. Earlier hair loss was mainly associated with older generation but the situation has changed completely today as almost everyone is suffering through baldness, hair loss and hair thinning and no one can be blamed for that. Ample of people are getting affected by hair loss due to which several treatments for hair loss are available in market today. Many women who are pregnant are going through symptoms of hair loss popularly known as postpartum hair loss. For men symptoms of hair loss may be minor lessening of follicles or other symptom includes leading to baldness.

Hair loss can happen as lessening in which hair falling out or shedding may not be noticed and hair will fall out in clumps. The kinds of situations which may lead to hair loss comprises of poor diet, hormonal changes, nutritional deficiencies, several medical conditions and surgery and mainly due to disease of thyroid. The signs of baldness in men can take place very early, also in teens and in early 20s. It is normally illustrated by a thinning hairline and balding at peak of head. This may result into Permanent or Temporary hair loss.